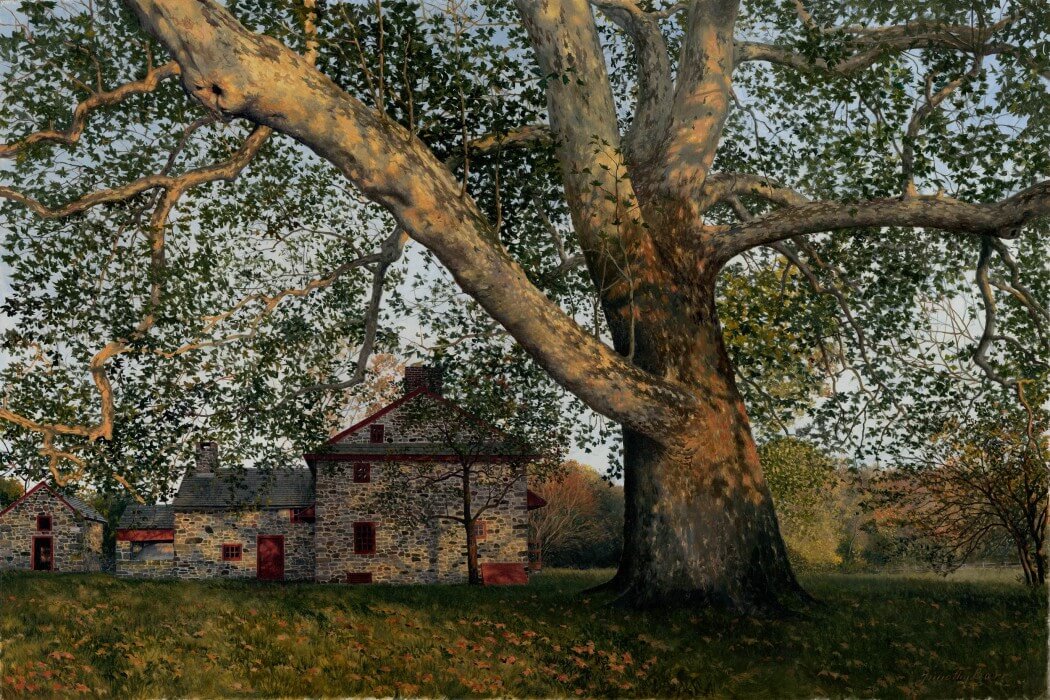 The Brandywine River Valley is one of those places where we may be unsure whether we love it for what it is or we love it because we love paintings of it. In 1777, the peaceful valley was the site of the largest battle of the American Revolution in which the British under Gen. Sir William Howe defeated the troops under George Washington, and marched on to capture Philadelphia, the capitol of the new nation. Today it’s difficult to imagine that battle or the horrific battles of the Civil War that took place not far away.

Since the early 19th century artists have visited the area and have painted their impressions. The Hudson River painter William Trost Richards was born in Philadelphia and later bought a farm in Chester County, through which the Brandywine runs. He recalled, “Before the weather had become so cold…I drove over to Coatesville, by ways more charming than I could have believed. In one place, for instance, the road runs by a mill race which on each side is bordered by old apple trees through which is seen the long slopes of the meadow. Everywhere there are pictures, which make me impatient for next summer.”

Later years brought three generations of Wyeths who, perhaps more than any other artists, have formed an image in our minds of what the Brandywine Valley is.

Timothy Barr has always lived nearby and described the draw of the region that he has chosen as the subject of his current exhibition. “It’s that colonial architecture mixed with rolling farmlands that are indigenous to this part of the country that I know so well. As a landscape painter it’s important to know the soul of the landscape you are painting. When I found my way down to the Brandywine Valley and began searching out places to paint for this group of paintings I was blown away by the incredible volume of interesting landscapes in the Chester County and northern Delaware region. It’s no wonder to me why such great artists as William Trost Richards and the Wyeths chose to paint there.”

Barr’s interpretation is startlingly different from many of the paintings we associate with the area—late fall scenes with brown grass and winter snows. “I was there during a particularly bright fall evening and was captured by the ‘golden hour’ and what it was doing to the red ochre barns,” he recalls. “It took quite a few layers of paint to even get close to what I saw in those scenes. I’m interested in the contrast that light brings to a scene. It’s fleeting and needs to be slowed down with paint so we can love it always.”

One of those barns in late afternoon light appears in Penny Barn Fall. Frost hasn’t yet taken the green from the leaves and the grass and the light of the “golden hour” is still physically as well as visually warm.

Barr remarks, “There are so many things to capture.” It isn’t possible to ignore the light, shadow, color, and reflections of Brinton on the Brandywine, but the intricate composition is striking. The image is painted on a rectangular panel, tree trunks and their shadows form a square at 90 degrees within the rectangle, narrowing our focus, and a triangle of trunks frames the river as it recedes into the distance. “It’s very much a part of me that I’m putting on the panels,” Barr confesses. “I only hope I can someday do the material justice by getting closer to the soul of it visually. It should keep me busy for a while. I’ll never be done painting this region.”

Explore More Work by this Artist 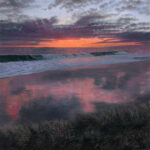